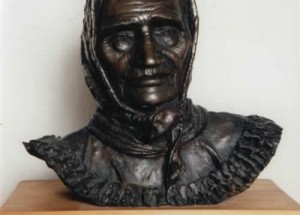 "The Quarry and its people inspire me so much, I have so many ideas here."

From her earliest memories Dell has always had an affinity with clay modelling, leading to her successful career as a sculptor. She was raised in rural Waikato and then studied Art and Political Science at Waikato University. After graduation, Dell travelled extensively around Europe while working in London.

Back in New Zealand, Dell had a restless period of trying different jobs until her creative nature lead her back to study. She completed a Diploma in Design at Waikato Polytechnic through Whitecliffe College of Art and Design.

It was during her time at Whitecliffe that Dell saw a film about Camille Claude, sculptor and lover of Auguste Rodin’s lover. She was so moved that she was inspired to buy a bag of clay the very next day. Thus began Dell’s passionate love affair with sculpting the human form.

Mostly self-taught, portrait sculpture is Dell’s first love and she has created portraits of several famous people, including New Zealand’s ex-prime minister Sir Robert Muldoon, who sat for her shortly before he passed away.

Amongst her favourite portraits are Dame Whina Cooper,  who led the first  Maori land rights marches, and maritime hero Sir Peter Blake. Dell donated her portrait of Sir Peter to the Maritime Education and Recreation Centre, of which Sir Peter was the founding trustee. The bronze casting of this piece was funded through the Sir Peter Blake Foundation. Her life-size ceramic figures and luminous bronzes have been sold internationally. Dell’s sensuous and highly figurative style can be seen in some of her favourite creations, which have been bought by private collectors in New York, Texas and California.